NEWS UPDATES  |  FACT SHEETS  |  BROCHURES  |  BOOKS  |  PUBLICATIONS  |  VIDEOS  |  FILMS  |  REPORTS
​​Click links above to view any of the BCPI resource pages
Reproductive Breast Cancer Risks and Breast Lobule Maturation
​Breast maturity is closely correlated with known reproductive risk factors for breast cancer. The breast is not fully developed at birth. At full development, the breast is comprised of 15- 25 lobes or segments which are in turn comprised of lobules. Lobules in turn are composed of breast cells.
​There are 4 types of lobules whose structural differences appear under the microscope.
Human chorionic gonadotropin (hCG, which stimulates the ovaries to produce estrogen and progesterone within a few days after conception) and prolactin also play a major role in maturation. HCG and hPL are made in the mother's womb during pregnancy. HCG also stimulates the ovary to produce inhibin, a cancer suppressing hormone, increasing protection of the mother even more.
​
These 4 types of lobules are also metabolically different and have different breast cancer potential. ​
Type 1 & 2 lobules have more estrogen and progesterone receptors than Type 3 which cause them to grow through mitosis (cell division) when estrogen and progesterone levels are elevated. Mitosis requires replication of DNA (genes) and therefore can result in mutations. 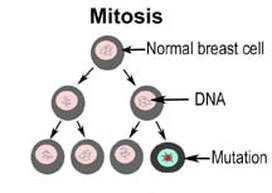 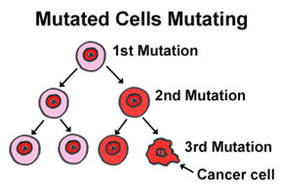 Type 1 lobules are where ductal cancers start. These account for at least 85% of all breast cancers.

Type 2 lobules are where lobular cancers start. These account for about 12% of all breast cancers.

At birth - after the mother's hormones dissipate, a small amount of breast tissue lies dormant under the infant's nipple & areola.

At puberty - when the ovaries produce cyclic elevations of the female sex steroid hormones, estrogen and progesterone, the breast enlarges. However, only Type 1 and 2 lobules are formed, which are where ductal and lobular cancers start respectively. Most of the breast tissue is stroma (tissue surrounding the lobules). The lobules account for about 10% of the breast tissue.

After puberty - there is a reduction in stroma and lobules account for 30% of the breast tissue: 75% are Type 1 and 25% are Type 2 lobules with a few Type 3.

After conception - the baby secretes hCG, stimulating the ovaries to produce the pregnancy hormones estrogen and progesterone, which cause the breast to start to enlarge by making greater numbers of lobules. This causes the mother's breast to feel sore and tender.

By the end of the 1st trimester - during the maturation of Type 1 lobules into Type 2, the actual numbers of these lobules will increase while the surrounding tissue (stroma) decreases. The breast now has more places for cancers to start.

By mid 2nd trimester - the breast has doubled in volume and has continued to mature rapidly under the influence of placental lactogen. The breast is now 70% Type 4 cancer resistant lobules and 30% immature cancer susceptible lobules.

By the end of the 3rd trimester - 85% of the breast is fully matured to Type 4 lobules and only 15% remain immature cancer susceptible lobules, leaving fewer places for cancer to start. At delivery, the mother's breasts are now predominantly Type 4 lobules. They are fully mature and resistant to carcinogens, resulting in lower long-term risk of breast cancer for the mother.

While breastfeeding - the mother's menstrual cycles may stop or become anovulatory, further reducing her risk.

After weaning - Type 4 lobules regress to Type 3 and the breasts get smaller again. However, there is evidence of permanent changes in the genes of these Type 3 lobules which confer life-long cancer resistance even after menopause when they further regress to Type 1.
These facts of the breast maturation process account for the following known facts about breast cancer risk:
Other pregnancy outcomes and breast cancer risk Premature delivery before 32 weeks:
Premature delivery before 32 weeks is known to more than double breast cancer risk because it leaves the breast with more places for cancers to start. The risk is proportional to gestational length. The pregnancy hormone levels are usually normal so the breast changes are those of a normal pregnancy. The effect of premature delivery is the same as in an induced abortion as they differ only in whether the fetus is delivered alive or not. The premature delivery may be caused by multiple gestations (twins, triplets or more with assisted reproduction pregnancies), an incompetent cervix, an induced abortion, or physician-induced labor for fetal abnormalities such as anencephaly.

Spontaneous abortion (miscarriage) in the 2nd Trimester:
The effect would probably be the same as a premature delivery in the second trimester and increase risk. Most 2nd trimester spontaneous abortions occur because of a physical and not hormonal abnormality. For example, there is fetal demise or the mother sustained an injury.

Induced abortion in the 2nd Trimester:
The effect would be the same as a premature delivery before 32 weeks and a spontaneous abortion in the 2nd Trimester. There would be increased risk because there are more places for cancers to start. There are data to show there is a 3% increase in breast cancer risk for each week of gestation before the abortion.

Stillbirth:
The death of an infant near or at delivery would not change that full-term pregnancy's protective effect on the breast. There would have been normal maturation of the breast to Type 4 cancer resistant lobules.

Ectopic Pregnancy:
This is the result of an embryo which grows outside of the womb (uterus); e.g. in the mother's Fallopian tube. Its effect on breast cancer risk would most likely be small or minimal as the pregnancy usually ruptures or causes a medical emergency very early on in the pregnancy. There is too little data to be certain of any small risk elevation.
References

8. Russo J, et al. Mammary gland architecture as a determining factor in the susceptibility of the human breast to cancer. The Breast J 2001;7:278-291.